Lead stabilizers used to be popular additives for the extrusion of PVC, due to their high thermostabilizing effect. However, due to health and safety concerns, these lead stabilizers are no longer in use in the European Union and are substituted by other additives. A typical PVC window formulation used to contain 2% lead. As it is the goal of CENTEXBEL to extract lead from old End-Of-Life PVC, there is a need for PVC test samples containing lead, to verify the extraction process. These samples were obtained through DECEUNINCK, who made 2 types: 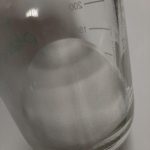 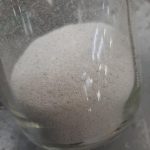 There are 2 main differences between these 2 materials. Firstly, the lead present in End-Of-Life PVC is lower than the typical 2%, which used to be the standard compound in PVC window profiles This is presumably caused by a small dilution effect, due to non-lead stabilized PVC, being present in the End-Of-Life PVC scrap. Secondly, the lead in the virgin PVC compound is almost completely located on the outer shell of the PVC grain due to the nature of the PVC compounding process, while the lead will be embedded deeply in the PVC matrix of the End-Of-Life PVC, since it has been processed before.
During the first trials an effective solvent for the lead stabilizers is being sought. In order to do so, a first screening experiment is running using different type of solvents. Furthermore, the corresponding optimal extraction conditions are also being determined, and the effect on the PVC matrix is being studied. 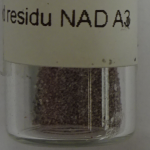 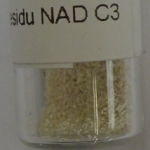 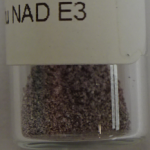 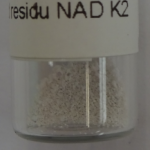 Figure 2: PVC samples which underwent a solvent extraction, using different types of solvents. Clearly certain solvents are not as compatible with the PVC matrix as others. This is clearly illustrated by the discoloration